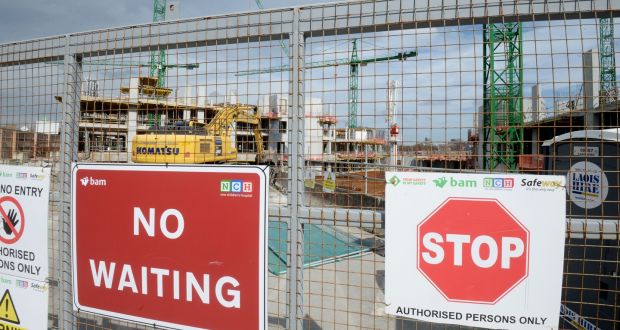 The construction sector should be able to gradually reopen in the first phase of the economy getting restarted, but new measures to combat coronavirus, also know as Covid-19, will inevitably increase costs and slow projects, according to the Construction Industry Federation (CIF).

CIF director general Tom Parlon says he is “very hopeful” that the construction sector can gradually reopen in the months ahead, subject to national decisions based on public health advice.

The federation has drawn up a new operating procedure for the sector after wide consultation, which is to provide guidelines for sites, including on physical distancing at work and also when travelling to work.

In some cases this may involve an early and a late shift working on projects, Mr Parlon told The Irish Times , so that fewer people are on site at any time. Proper sanitation facilities will also have to be provided and every site will have a Covid-19 inspector.

The rules are expected to increase time lines and cost for the delivery of projects for as long as the pandemic persists. In turn this could have implications for cost and for the length of time it will take to complete big Government projects. All workers will also have to complete an online induction programme, according to Mr Parlon, to ensure they understand the rules.

The options to gradually restart economic activity have been discussed between industry representatives and the Government at the Labour Employer Economic Forum. If the go ahead comes after the May bank holiday to gradually restart activity, it is likely that work on significant foreign direct investment (FDI) building projects would be first in line, possibly followed by social housing projects nearing completion.

The Housing Agency may give the go ahead shortly for some of these to be finished. Major civil works – such as road building – may also be targeted as these generally involve work by machine where distance can be maintained. General house building could be in a later phase.

Business sources believe that the timing of restarting construction and other business activity will depend not only on the path of the virus in Ireland but also the experience in other countries where restrictions are now being lifted. As well as construction, some non-essential retail stores and manufacturing plants may also be in early reopening waves.

An estimated 150,000 employees in construction have either been laid off or put on income support in recent weeks, so getting many of them back to work gradually would ease pressure on the exchequer. Construction is also deeply linked to the domestic economy and will spin off activity to suppliers and service providers.

The new operating procedure has been developed by the CIF in consultation with major contractors, FDI clients, international experts and benchmarked against documents in the United Kingdom and Europe.

The sector had faced criticism as the crisis broke over some building sites continuing to operate. But Mr Parlon says that the new document will introduce a “strict protocol” which goes beyond HSE guidelines.

Prevent unauthorised MEWP use on site!

The CIF Safety and Health Subcommittee, mindful of the best available guidance, nationally and internationally,...

This website or its third-party tools use cookies, which are necessary to its functioning and required to achieve the purposes illustrated in the cookie policy. If you want to know more or withdraw your consent to all or some of the cookies, please refer to the cookie policy. By closing this banner, scrolling this page, clicking a link or continuing to browse otherwise, you agree to the use of cookies.